The Purple Moose books are written with the help of Mrs. Kristen Steele. Purple Moose entered her life after meeting him in the gift shop of the Water Wheel Breakfast and Gift House in Jefferson, New Hampshire in 2005. He was the perfect NH memento to take back to Ohio to share with her kindergarten class, where the school color was purple! Purple Moose’s airplane trip back to Ohio turned into Purple Moose’s first adventure book! He became the class mascot and loved creating stories with his many classmates. Mrs. Steele taught kindergarten and special education in the public schools systems of Virginia, Ohio, and New Hampshire for over 27 years. After returning to her native NH, she began working on publishing and writing the Purple Moose stories that her former students loved and inspired. Mrs. Steele is a big believer that children learn through play. It is her goal to live with enthusiasm and share her love of learning, the arts and the world with children.

For more about this book and others by Purple Moose, go to www.purplemoosekids.com

Kristen Steele and the Purple Moose will be at Just Maple for a book signing Maple Weekend, March 23-24. Details 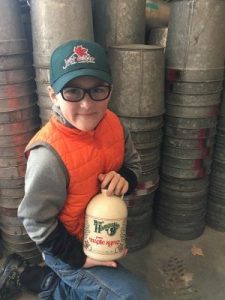 Ethan Lamay is likely the youngest maple producer in NH.

A young mapler will join the Proulx family during Maple Weekend, March 23-24.

At the age of nine, Ethan Lemay has already learned something that most people don’t know, the effort that is put into producing maple syrup. Ethan has been maple sugaring with his dad now for 5 years and recently has decided to venture off own on his own. With the help of his parents, he has made hats, logos and even his own barrel stove evaporator that he and his dad made. The first and last boil of the season are on the barrel stove and when he’s not boiling, he’s out helping run his and his dad’s 300 bucket hobby operation. From collecting and boiling sap to filtering and bottling syrup Ethan has had a hand in every aspect of the operation and has quickly learned that with hard work and dedication comes sweet success!

Click here for details on our Maple Weekend open house. Free and open to the public, no reservations required.

NH Maple Season typically is in March, but the Barn Store is open year 'round. We look forward to seeing you!
Call 603 520

Just Maple is a NH Made Member